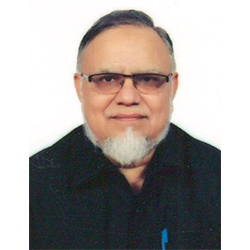 Prof. Khaja Naseeruddin has being working in the department of ENT-HNS in HIMSR for the past 5 years. He has a total teaching experience of more than 39 years in various capacities including Dean, Director and Joint Director, Govt of Karnataka. He has been a UG and PG teacher and has guided PhD students as well. He was awarded Fellowship of Indian Academy of Otolaryngology in 2004. He has various publications in National and International peer reviewed journal, has presented many papers and has been a panelist in National and International conferences. He has organized several CMEs, workshops and conferences. He was nominated for the “Cambridge Blue Book International Man of the Year Award” in 2009 by International Biographical Centre, Cambridge, UK and nominated one of the “Top 100 Health Professionals” in 2011 & in 2012 by the International Biographical Centre, Cambridge, England.